This diagram shows the Earth's energy budget, which includes the greenhouse effect. The following description is an edited quote from a public-domain source (Lindsey, 2009): On average, 340 watts per square meter (W.m-2) of solar energy arrives at the top of the atmosphere. Earth returns an equal amount of energy back to space by reflecting some incoming light and by radiating heat (thermal infrared energy). Most solar energy is absorbed at the surface, while most heat is radiated back to space by the atmosphere. Earth's average surface temperature is maintained by two large, opposing energy fluxes between the atmosphere and the ground (right)—the greenhouse effect. Incoming solar radiation to the Earth is equal to 340 watts per square meter (100%). Of this (units are a percentage of incoming solar radiation to the Earth): 29% is reflected back into space. This is reflected by clouds and the atmosphere (23%) and the Earth's surface (7%) 23% is absorbed in the atmosphere 48% is absorbed by the Earth's surface. The Earth's surface releases 5% of the energy into the atmosphere by convection and 25% by evaporation. The amount of heat radiated from the atmosphere to the surface (sometimes called “back radiation”) is equivalent to 100 percent of the incoming solar energy. The Earth’s surface responds to the “extra” (on top of direct solar heating) energy by raising its temperature. The amount of heat a surface radiates is proportional to the fourth power of its temperature (the Stefan-Boltzmann law). As solar heating and “back radiation” from the atmosphere raise the surface temperature, the surface simultaneously releases an increasing amount of heat—equivalent to about 117 percent of incoming solar energy. The net upward heat flow from the Earth's surface is equivalent to 17 percent of incoming sunlight (117 percent up minus 100 percent down). Some of the heat escapes directly to space, and the rest is transferred to higher and higher levels of the atmosphere, until the energy leaving the top of the atmosphere matches the amount of incoming solar energy. Because the maximum possible amount of incoming sunlight is fixed by the solar constant (which depends only on Earth’s distance from the Sun and very small variations during the solar cycle), the natural greenhouse effect does not cause a runaway increase in surface temperature on Earth. In the diagram (as before, energy flows are measured as a proportion of incoming solar radiation to the Earth): heat directly leaving the Earth's surface (through the "atmospheric window") equals 12% 50% of heat is emitted by the atmosphere. Of this, 9% is emitted by clouds total outgoing heat radiation equals 71%. Trenberth et al. (2009) estimate an energy imbalance at the top-of-the-atmosphere of 0.9 watts per square meter, due to the enhanced greenhouse effect. The diagram was adapted by Robert Simmon from Trenberth et al. (2009), using CERES flux estimates provided by Norman Loeb. 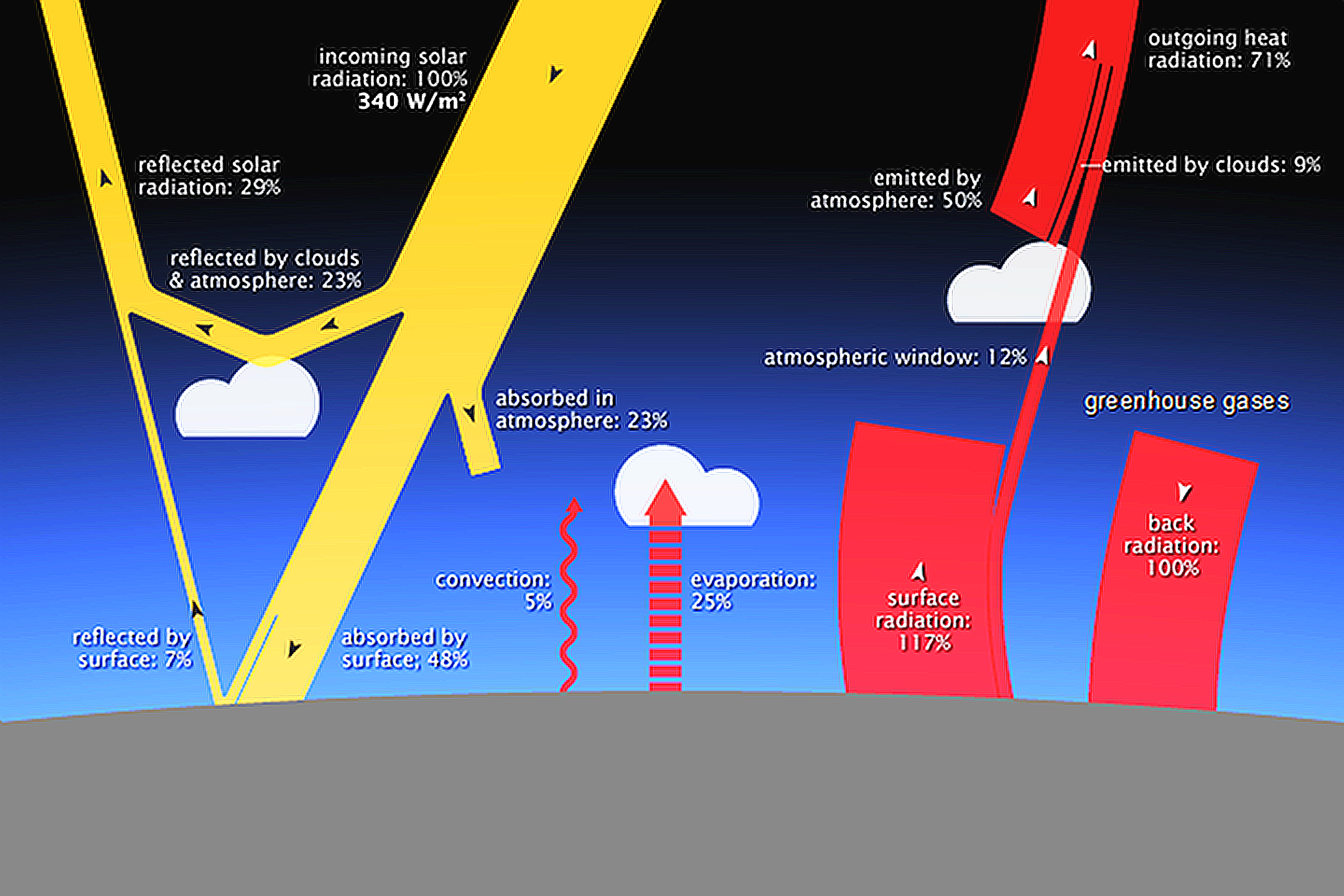